Laci Szabo is a law enforcement officer, a veteran U.S. Marine, and a word-class martial artist. He is also one of the most visionary knife designers in the industry, combining a unique flair for aesthetics with an in-depth understanding of function and defensive application.

The Szabo folder is a reflection of Laci’s philosophies regarding folding knife design as it applies to both utility and personal defense. Its large size creates a commanding presence and offers increased reach when used with fencing-style skills. The dramatic scimitar-shaped blade has a long, gently curving belly to maximize cutting power, while leaving the tip well centered to support point-oriented tactics. An unsharpened swedge on the back of the blade ensures an acute point and flows smoothly into a scalloped area on the spine. This unique geometry reduces drag and enhances the blade’s trapping potential when applied with reverse-grip skills. The blade is mated to a generously sized handle that easily accommodates the largest hands and provides extreme leverage in all applications.

The original version of the Szabo folder was released in 2012 and featured a satin-finished blade and Gold Line G-10/carbon fiber laminate scales. In 2013, this version has been discontinued in favor of an all-black edition even better suited to tactical applications.

The heart of the Szabo folder is its 5.85-inch CPM S30V scimitar-shaped blade. Its partial hollow grind creates excellent edge geometry while reinforcing the spine for increased strength. A Trademark Round Hole™ in the blade supports swift one-handed opening with either hand and, together with a subtle guard on the edge side of the blade, effectively protects the user’s hand during use. For applications where light discipline is critical, the Szabo’s blade features a non-reflective titanium carbonitride coating.

To cope with the extreme leverages associated with its longer blade, the Laci Sazabo folder features an enhanced version of Spyderco’s proprietary Compression Lock mechanism—one of the strongest folding knife locks ever designed. When the knife is opened, a split leaf spring integral in one of the handle’s stainless steel liners extends between the stop pin and an upward-facing ramp on the blade’s tang. The wedging force of this spring locks the blade securely and its placement on the back of the handle makes it virtually impossible to disengage during use.

The Szabo folder’s Compression Lock is also unique because it is accompanied by an internal “self-close” mechanism. Nested within one of the handle halves, this mechanism gains mechanical leverage as the blade is closed that it closes completely and remains securely within the handle for safe carriage. Convenient carry is further supported by a four-position clip that offers tip-up or tip-down carry on either side of the body.

The Szabo folder is a technologically and artistically advanced folding knife from the mind of one of the knife industry’s most creative designers. We sincerely hope that yours serves you and your personal needs well. 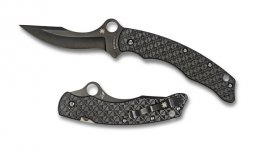 Patented in April 2003, Spyderco’s Compression Lock is the brainchild of the company’s founder Sal Glesser. Offering an amazing synthesis of strength, compactness, and ease of use, it is also one of the most underappreciated locking mechanisms in the knife industry.

When many people see a Compression Lock for the first time, they describe it as “a LinerLock on the back of the knife.” While the spring bar at the heart of the lock does resemble that of a Michael Walker-style LinerLock, the Compression Lock is very different. In a LinerLock, the tang of the blade features an angled or slightly concave “ramp” that faces the butt of the handle when the blade is open. The lock bar—a spring tab integral to one of the handles liners—is shaped so it is biased to move toward the center of the handle slot. When the blade is opened, it moves across the tang ramp and wedges against it, blocking the blade from closing.

When extreme pressure is applied to the back of the blade of a LinerLock, the lock ultimately fails when the lock bar bends or, more likely, when it slides off the ramp on the blade and allows it to close.

When pressure is applied to the back of the blade of a Compression Lock, rather than bending or moving the lock bar, the ramp on the blade must try to crush it along its vertical plane. Held in place by the stop pin at the top of the handle, the lock bar is “compressed” between that pin and the tang ramp. In order for the Compression Lock to fail, the stop pin must literally shear through the liners and out the top of the handle.

The Compression Lock is one of Spyderco’s strongest folding knife locks and can be found only on Spyderco products. Despite its extreme strength, it is also one of the safest and most user-friendly lock mechanisms—especially when closing a knife. By bracing your thumb against the left handle scale and pinching the lock release between your thumb and index finger, you can release the lock and swing the blade closed without ever placing your fingers in the path of the blade.

Simple, safe, reliable, and incredibly strong, the Compression Lock is yet another distinctive feature available exclusively from Spyderco.